In late September of 2005 I bought an Airstream trailer, a 1969 Tradewind Deluxe LY, 25ft with rear bath, curb side double bed and front goucho. 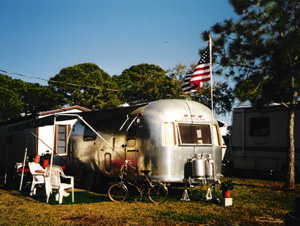 It was a hard decision to make but my plans changed and it didn't look like I'd be able to finish rebuilding this Airstream and I decided to pass it on to someone who can give it the attention it deserves.

See For Sale - 1969 Airstream Tradewind for some pictures and a description.

Alumapalooza is the official annual event held at the AIRSTREAM factory in Jackson Center, Ohio! Produced with the support of AIRSTREAM, Airstream Life magazine, and other sponsors, it will be held May 29th – June 3rd, 2012.

Pursuing an interest in Airstream trailers

My interest in Airstream trailers, and campers in general, goes back many years but it's an interest I did not begin to actively pursue until some time in 2004. In fact I had never been inside an Airstream until my trip to the Harrisburg show with my buddy Jane in 2004. That trip reinforced my interest and I started keeping a look out for a likely candidate to play with.

Eventually I spotted a trailer on an independent RV dealer's lot, '75 Tradewind. I took a look. It seemed in pretty decent shape to my then untrained eye but I passed it as too much money to just play around with and I didn't really like the interior styling. Soon after I passed on it it sold and was moved to the back of the lot.

A couple weeks later another Tradewind showed up on the same lot (as did the first one again, this time with a slightly lower price). This second one, a '69 Tradewind, looked better to me. The interior was in nice shape, it was the last of the earlier body style, and it appealed to me more than the styling of the trailers built in the '70s. It had a classic case of Rear End Separation and the price reflected that. I bought it right then & there. A good thing too; other buyers lined up for it before I could even get it off the lot.

So just what IS Rear End Separation anyway? Ha - you probably don't want to know!

A plan to convert the Tradewind to a mobile studio

I'm thinking of converting the Tradewind to a mobile crafts studio. I'm an aspiring leather artisan and think it might be nice to carry my studio about with me. I might even use it as my studio here at home. Ideas and sketches are accumulating here.

My 1969 Airstream Tradewind - Table of Contents