I bought a nice 1992 Lazy Daze 26-1/2MB Class C motorhome I plan to use for snow-birding and perhaps full-timing if I find the lifestyle works for me.

How and why I chose a Lazy Daze Class C

The evolution of my journey to Lazy Daze from my original concept of remodeling my 1969 Airstream Tradewind for use as a studio on wheels was long and slow. Ever since my motorcycling days wandering around the countryside, mostly in the west, I've wanted to get back on the road and see this beautiful country in greater depth. I want to travel for months at a time and to do that I need studio space with me. Too many days without a tool in my hand makes me twitch. It doesn't matter too much what that tool is - I have lots of interests - as long as I have a tool. Being so needful of hands on projects I thought I might convert the Tradewind into a traveling leather studio, my interest at the time (and still my interest). Leather is light enough to travel, doesn't require a lot of tools or a lot of power and is reasonably small. Many of my metalworking interests, on the other hand, would be a problem to tote around. Except for some hand wrought jewelry I make, my metalworking requires heavy, powered, machine tools. These are not at all conducive to boondocking - my favorite mode of travel. Boondocking (camping without the benefit of electric, water and sewer hook-ups) requires me to travel light and self sufficiently.

My drift away from the 1969 Airstream Tradewind

As I thought about and worked on the Airstream I became disillusioned with it for my purposes for several reasons. First, it needs some fairly typical and serious "rear end separation" and sag repairs I just haven't found the time nor inclination to tackle. Then there's the issue of needing a big heavy duty tow vehicle to pull it. Which makes for a larger and more expensive rig than I would prefer to haul around the country. I want to keep my rig small and maneuverable so I can visit places a larger rig just won't feel comfortable in. Eventually I started thinking I might build myself a nice compact multi-function rig in a long wheelbase Sprinter van. It didn't take long for me to realize just how expensive in both time and dollars that was going to be. To say nothing of being a wee bit too small. Along about then it dawned on me I could probably find a decent used RV for less than I would have in the Airstream and tow vehicle.

First I homed in on the small Safari Trek Class A's

I started looking around the net to see what might make sense instead of the Airstream. Something of good quality and not too big. It didn't take long to discover that the vast majority of Class A motorhomes are poorly built and too large to boot. Think McMansions on wheels. My research online slowly led me toward the Safari Trek with its clever overhead bed, which seemed to offer a good use of space in a reasonably small package. But a couple of things kept nagging at me. One was that bed mechanism which looked rather prone to mechanical failure. And the Treks old enough to be in my budget range are built on Isuzu diesel truck chassis which I feared, rightly or wrongly, might be difficult to get serviced when broken down out in the boonies somewhere.

Then I discovered the Lazy Daze Class C's

While fretting over those issues I somehow became aware of Lazy Daze outstanding reputation in the RV world for building top rated Class C rigs. Until now I had ruled out Class C rigs as second class citizens. And many of them are. But people all over the web were pointing to the Lazy Daze class C's as well thought out and solidly built rigs made by a small family owned company that had practically invented the Class. Now there's a concept I have some familiarity with with my Power Trac tractor. The more I read the better they seemed and the better they seemed the less ugly they looked. Why is that? Eventually I ended up at the enthusiastic Yahoo Lazy Daze group, Life With A Lazy Daze RV and Andy Baird's Travels with Gertie devoted to his travels with an older 23TK model, and later his Skylarking pages devoted to his upgrade to a newer 26-1/2MB model when he decided to go full time. His adventures, and others, soon convinced me Lazy Daze was the way to go and that the 26-1/2 MB was the best model for my foray into serious RV living.

Andy Baird compiled an extensive collection of modifications and upgrades from his work on Gertie and Skylark into an excellent CD-ROM he offered for sale on his website. He has now put up a free online edition. Have a look - I heartily recommend it.

... I bought my first RV eleven years ago, and because it was an older model, I plunged right in and started upgrading and enhancing it. For me, that was half the fun of RVing! And as I made changes, I documented some of them on my "Travels with Andy" website.

After a year and a half of fulltiming in my first rig, a 22' 1985 Lazy Daze motorhome, I knew enough about my wants and needs to buy a newer, larger 2003 rig, which I named "Skylark." I immediately set to work enhancing the new rig, including some fairly major projects like ripping out a couch and installing a wraparound desk in its place. Everything I did to both these rigs, and much more, is included in Eureka Live.

I started planning my 2007 road trip around hunting up some Lazy Daze for sale I might get a look at as well as paying a visit to the Lazy Daze factory in Montclair CA. Then I started getting ahead of myself by trying to figure out the logistics of getting one home without breaking the bank should I be lucky enough to find a suitable rig. Do I sell my truck and drive it home and buy another truck when I get back? Do I drive home and fly back for a rig? Round and round my mind went. Phew, too many variables. My head hurt. But this project was getting exciting.

I find a likely candidate

Just before I left on my trip I came across a 1992 26-1/2 MB for sale in Memphis TN. It was a tad older than I might have preferred but it had the advantage of being much closer to home than anything I might find in the west and I decided to have a look at it. 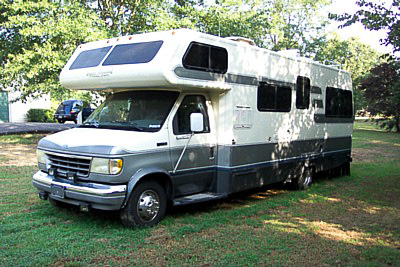 I knew the moment I walked in the door that the 26-1/2 MB was the right model for me. This one seemed to be in pretty good condition but it was late in the day so I took only a fairly quick look around and made arrangements with the sellers to have a better look the next day. I had noticed a patch of the notorious blistered aluminum skin near the refrigerator and wanted to satisfy myself that this had been fixed and to give the whole rig a real good looking over.

This candidate has a leakage problem

The rest of the rig seemed to be in pretty good shape. There's a leak in the power steering unit that could be a hose. Or something more serious. The engine started and ran well. I couldn't test the winterized water system and relied on the good will of the sellers that everything works ok. But that darned leak. What to do?

Why buy it of course (well, after a bit of negotiation that is).

My Lazy Daze - Table of Contents

Electrical System Upgrades - I'm gradually upgrading the electrical system in my 1992 Lazy Daze 26-1/2 MB Class C motorhome. I had naively assumed the generator would be used to charge the house batteries and was quite taken aback to learn otherwise. This discovery lead me to consider making extensive electrical system upgrades and I've decided to devote a separate page to them here.

Repair and Maintenance Log - This page will serve as a repair and maintenance log for 1992 Lazy Daze 26-1/2MB Class C motor home. Some day I may put up a separate log of the repairs and maintenance activity performed by earlier owners that I am able to glean from the maintenance records that came with it.

Major Water Leak Repair - When I first looked at the Lazy Daze in Memphis I noted blistered paint around the refrigerator service vent. This is generally recognized as a sign of water behind the aluminum skin etching its way through the skin over time and pushing the paint off.

A Tale of Two Leaks - Woe is me. My precious Lazy Daze is leaking again. Last fall I discovered two leaks in my 1992 Lazy Daze Mid Bath RV. I sealed this - I sealed that. The leaks, they go on leaking.

Upgrading the RV - Here I'll be logging the upgrades I've made to the Lazy Daze and my impression of whether they are successful for my purposes. I'll also keep a list of ideas and pending upgrades here. And perhaps some references to how others have improved their rigs.

Leather Wardrobe Pulls - Lazy Daze Motorhomes have square plastic pulls or, on later models, rectangular ones glued on the mirrored doors of the wardrobe. At least in the Mid Bath models those doors are in a narrow hallway and the pulls can be quite annoying. I have a better idea. Leather straps.

Winter Boondocking - I have some thoughts on winter boondocking and power consumption after my experience living without hookups for most of the month of December 2010 in southern New Mexico.