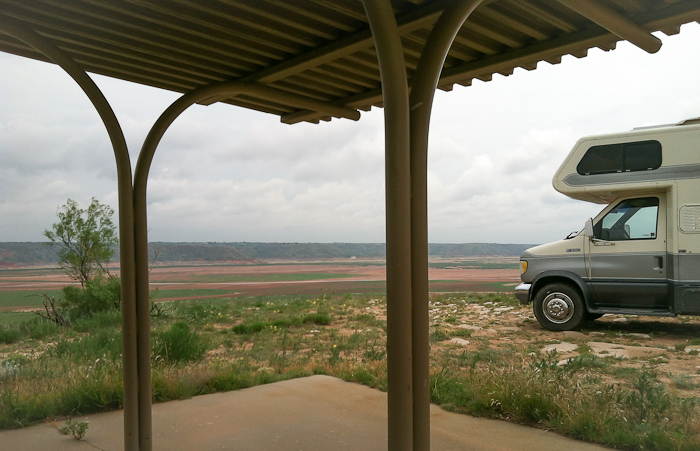 Lake Meredith National Recreation Area is located on the shores of a Canadian River Reservoir near Fritch TX north of Amarillo TX.

Wind on the Gangplank

There was almost no soil in that part of the range - just twelve miles' breadth of rough pink rock. "As you go from Chicago west, soil diminishes in thickness and fertility, and when you get to the gangplank and up here on top of the Laramie Range there is virtually none," Love said. "It's had ten million years to develop, and there's none. Why? Wind - that's why. The wind blows away everything smaller than gravel."

Standing in that wind was like standing in river rapids. It was a wind embellished with gusts, but, over all, it was primordially steady: a consistent southwest wind, which had been blowing that way not just through human history but in every age since the creation of the mountains - a record written clearly in wind - scored rock. Trees were widely scattered up there and, where they existed, appeared to be rooted in the rock itself. Their crowns looked like umbrellas that had been turned inside out and were streaming off the trunks downwind. "Wind erosion has tremendous significance in this part of the Rocky Mountain region," Love said, "Even down in Laramie, the trees are tilted. Old-timers used to say that a Wyoming wind gauge was an anvil on a length of chain. When the land was surveyed, the surveyors couldn't keep their tripods steady. They had to work by night or near sunrise. People went insane because of the wind." His mother, in her 1905 journal, said that Old Hanley, passing by the Twin Creek school, would disrupt lessons by making some excuse to step inside and light his pipe. She also described a man who was evidently losing to the wind his struggle to build a cabin: