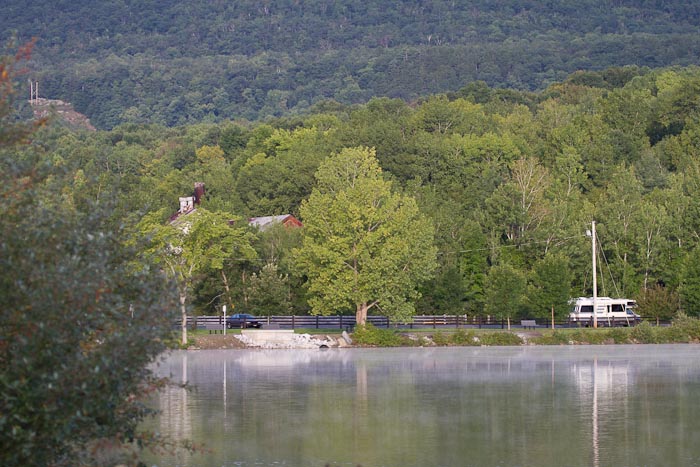 On November 15, 2007 I moved into an old Lazy Daze motorhome and left Red Rock on my first extended journey to the Southwest to spend the winter in warmer climes and to try my hand at this fulltiming thing as a way to explore this beautiful country in my retirement.

It turns out I love this life more than I could have imagined and now can't imagine living in a so-called sticks and bricks house again.

Fulltiming is central to my life now.

Fulltiming refers to living full time in a motorhome, whether parked in one place or on the move. Some folks move seasonally. Some travel regularly. Some seldom move at all. Early on I traveled a lot but now I find myself moving more or less seasonally between places I've grown fond of, while cherishing the traveling I do between stops.

Genesis of an idea

The seed of the idea of living a mobile lifestyle was planted back in the late '80s when my cabinetmaking business went bust and I started riding around the country on my old 1974 BMW R90/6 motorcycle, licking my wounds and thinking about what to do next.

On one of those trips I met a couple at Arches National Park traveling in a small motorhome and started asking questions. They lived full time in a larger motorhome in Arizona and traveled in this smaller one. They were very enthusiastic about the full time RV lifestyle and urged me to try it. The seed planted, I spent the rest of the trip trying to figure out how I could make that happen.

No workable plan came to mind; there was too much going on back home and I just wasn't ready. But the seed germinated and the sprout grew slowly for years while I continued with the motorcycling and became infatuated with the west.

Out of the trees

At some point I remember beginning to say how it felt so great on those motorcycle trips when I crossed the Mississippi River and got "out of the trees" and into the open country of the western plains and mountains. It fed my soul. I couldn't explain it and still can't but the feeling was visceral and deep and I was determined to live a mobile lifestyle and travel the west. Somehow, someday.

Time passed, life went on, and the dream flourished

Finally early in this century I was ready to start moving toward the dream but I had no clear idea how to proceed. I lost interest in my work and knew it would soon be time for a change. This could be the opportunity to launch the dream. I was developing an interest in making forged wire jewelry, among other things, and jewelry was something I could pursue in a small space with very little equipment. Maybe there was a way to make it work.

In 2004 I stumbled on an old Starcraft truck camper I thought I might rebuild into a mobile jewelry studio. That idea quickly proved impractical and fizzled so I abandoned the project and moved on to the next idea, converting an old 1969 Airstream Tradewind trailer I found. That idea fizzled too when I concluded it needed too much work to be practical.

By then I was beginning to think a self- contained RV would be a better choice and research led me to Class C's and eventually to a 1992 Lazy Daze Mid Bath, now my home since November 15th, 2007.

I set up a Journal to record this ongoing adventure, beginning the day I left on this long adventure on November 15th, 2007.

Traveling and living full time in my Lazy Daze RV for a couple of years, here's where I've made my night camps.

Karl Blossfeldt (1865-1932) was a German instructor of sculpture who used his remarkable photographs of plant studies to educate his students about design in nature. Self-taught in photography, he devoted himself to the study of nature, photographing nothing but plants for thirty-five years.