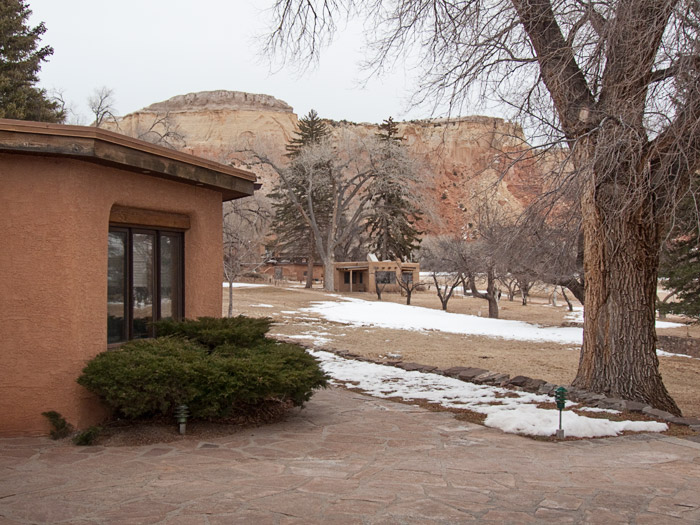 A few words about Ghost Ranch

From Ghost Ranch in Abiquiu and in Santa Fe, an Education, Retreat and Conference Center - History:

Ghost Ranch was given by Arthur and Pheobe Pack to the Presbyterian Church in 1955. The 21,000 acres that comprise Ghost Ranch were part of a land grant to Pedro Martin Serrano from the King of Spain in 1766. The grant was called Piedra Lumbre (shining rock). The name "Ghost Ranch," or the local name "El Rancho de los Brujos," was derived from the many tales of ghosts and legends of hangings in the Ranch's history.

For over fifty years the Church, the staff, the National Ghost Ranch Foundation and many friends and supporters have built the programs, facilities and grounds into a nationally known study and conference center.

Ghost Ranch is a 21,000-acre education and retreat center located 60 miles north Santa Fe just beyond the small town of Abiquiu in northern New Mexico. Along with offering over 300 courses a year, Ghost Ranch is home to The Ruth Hall Museum of Paleontology, The Florence Hawley Ellis Museum of Anthropology, and The Piedra Lumbre Education & Visitor Center. Visitors to the ranch will find hiking trails, gift shops, art galleries, a coffee shop, a 24-hour library, conference and meeting spaces and overnight accommodations. Ghost Ranch is renowned for the landscapes made famous by painter Georgia O’Keeffe.