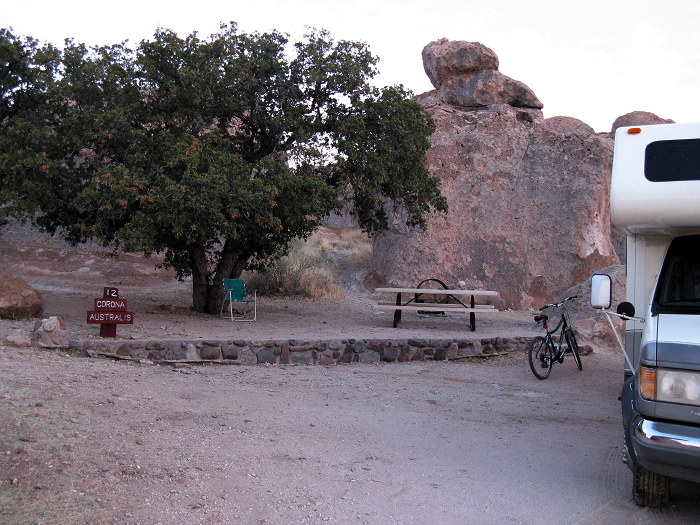 Acting on a whim

Today I broke camp at Site 12. I was low on supplies and my waste tanks were full (there is no dump station at City of Rocks State Park). My plan was to head off to Deming, stock up, do laundry, and then head out to Rockhound State Park for a dump and a night before heading over to the Rio Grande valley to begin a slow drift north to Albuquerque where I will rendezvous with my friend Jane for a few days in early April before beginning the long trek back to Red Rock for the summer.

Best laid plans and all that. On a whim when I pulled out of Peppers Supermarket in Deming I took off for Leasburg Dam State Park on the Rio Grande instead.

So here I am looking out at spring popping out all along the now mightily flowing river.

Coming over the Hatch Cut-off I took a look for the dirt road that leads in to the mysterious formation I noted yesterday. I found it right next to a little ranch and chickened out about running in there - the road, Cook's Canyon Road, looks like a farm road and I'm not sure what the etiquette is about traveling such roads. Maybe next time I'll be braver.

Yesterday I learned from a neighbor at City of Rocks that the formation is on BLM lands so it is probably ok to walk in. We'll see. This thing fascinates me.

In a New Mexico Wilderness Alliance article Cookes Range - Florida Mountains Complex there is information here about accessing the Cook's Spring / Cook's Canyon area in the neighborhood of these circles.

In a Desert Exposure article HIKING APACHERIA - Who Walks with the Warriors? the author describes how back in the day when the Apaches and the American Buffalo Soldiers were getting it on the Apaches had a view point in the Florida Mountains down across from Rockhound State Park where they could get a few hours warning when an Army party left their Cook's Spring encampment, which was visible to them as a plume of dust. Cook's Spring is less than 2 miles west of these circles. Here's how the author, Jerry Eagan, puts it:

Today, I'm searching for a place in the Floridas I'd found two years ago. It wasn't much, but I'd seen it a week earlier, and wanted to check it out again. I feel at peace here, in these rugged mountains, as if I'd always been here.

I choose a route I'd never used before to get to the top. I'd been intrigued by a rock outcropping on the ridge line, and wanted to investigate it. I'm not let down. After eating lunch, I come around a rocky bluff and find what I believe were once Apache breastworks. Notches had been cleaned out beneath large boulders: spaces that gave shelter from sun, heat, wind, rain, snow, if one wasn't looking for luxury. Between those large boulders I spot the suspected "breastwork." From behind them I can see Camel Mountain, 20 miles to the southeast, in the West Portillos, directly on the border. Beyond Camel Mountain, in Chihuahua, lies Laguna Guzman—a favorite watering hole for the Apache on their annual migrations in winter and spring.

In battle after battle, the Apaches automatically built rock breastworks for cover. Breastworks have been used by white men for centuries, but Chihinne survivor James Kaywakla humorously stated that his ancestors "invented trench warfare" when they built these defilade to hide behind in a gunfight. Whoever built these breastworks, they knew what they were meant to do. Apache or American? Americans always leave trash. An absence of trash, to me, suggests Apache. Even so, no prize, because I won't dig to confirm the origins of this rock wall.

Defilade. An odd word very important for soldiers. Webster's Encyclopedic Dictionary says: "def-e-lade: n. v., protection or shielding from hostile observation and flat projecting fire provided by an artificial or natural obstacle [such] as a hill . . . to shield from enemy fire by using natural or artificial obstacles." Crazy or not, I'd asked "them" to "show me what you want," and my curiosity and instincts had paid off by exploring this outcrop.

Go there! Take your time. See what is there! the Apache seem to urge.

Facing southeast, behind such a defilade, a rifleman would be covered, and could see Mexicans coming north for miles. If the Mexicans were chasing Apache, one warrior could hold them off for awhile. Facing north-northwest, the same man could see Americans coming into the canyon.

Another hour and a half and 500 feet more in elevation gain, across several talus slopes, and I find the cave I'd been looking for. I feel satisfied that my memory had served me so well. Crawling into the cave, it's clear a man could lie on his back and look north-northeast, towards Cooke's Peak and Fort Cummings, where American Buffalo Soldiers were stationed after the Civil War. From this small cave, one could stash gear, water and ammo, and remain hidden to anyone gazing south, towards the Floridas. There'd be no risk of sunlight glinting off metal or glass (the Apache valued binoculars very highly) they'd taken from Mexicans or Americans they'd killed.

The cave, roughly seven feet wide, perhaps two and a half high at the mouth, but eight to ten feet high inside, feels cool and felt safe as I take off my gear and slip inside.

Cooke's Peak, which some Apache called "White Rings Around Mountain" or "Standing Mountain," is partially lost in haze. No wind and plenty of exhaust fumes from I-10. The old Buffalo Soldier fort had been located south and slightly east of Cooke's Peak, at the mouth of Cooke's Canyon, near Cooke's Spring. Plenty of history, carnage, isolation and madness. People from all over the world have come and gone through here with the winds of time. Desperate mail riders and balking stagecoaches. At least 20 graves still litter the canyon. From this cave, knowing where those features were, an Apache could have seen dust clouds rising from cavalry headed out of the fort, prowling for Apache. A few hours' warning and then maybe they'd get behind those breastworks and fight the soldiers.

I'vre started gathering my research on these circles at What are those Circular Symbols drawn in the desert at Finger Ring Draw?.

We Are Clearly a Species Worth Saving

Our world is entering a time of profound and perhaps catastrophic change. My hope is that by getting people to care about and learn about what is in their backyard, they can be made to realize that while it seems like we are destroying the planet in out greed and excess, what we are really destroying is ourselves. The planet and life in general has dealt with catastrophe many times before. Cataclysm on Earth is a creative time and evolution can handle it. Culture is much more fragile and we as individuals are more fragile still. I think that it is time for people to come to terms with the fact that our own behaviors put humanity at risk. While people have always done atrocious things, I believe that we are a species capable of beautiful, amazing and important things as well and we are clearly a species worth saving.