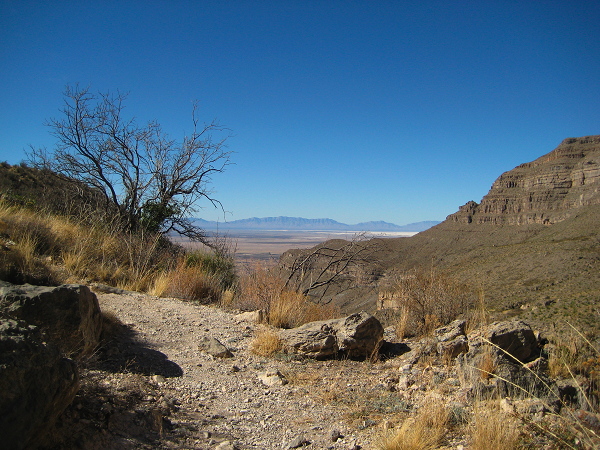 I probably would have stayed at Pancho Villa State Park for the long President's Day weekend and then moved to Rockhound next Tuesday but I ran out of food and, Rockhound being closer to food than Pancho Villa, after restocking I headed over this way.

A couple of hours after I got set up here folks with a fairly new blue Lazy Daze 26-1/2 Mid Bath pulled in next door. They left early the next morning and, silly me for not introducing myself this afternoon, I didn't get to meet them.

It's No Use Arguing Tastes with a Cow

By what appears, furthermore, to be the compensating justice of Nature, the treasures of the earth are always hidden in the most unattractive, dismal, and dreary spots. At least all the mining places I ever visited are so located, and Bisbee is no exception. To get away from the cramped little village and its unsavoury restaurant, I established my first camp four miles south of it on a commodious and pleasant opening, where we could do our own cooking. But here a new annoyance, and rather a curious one, was met with. The cattle of the region evinced a peculiar predilection for our wearing apparel. Especially at night, the cows would come wandering in among our tents, like the party who goes about seeking what he may devour, and on getting hold of some such choice morsel as a sock, shirt, or blanket, Mrs. Bossie would chew and chew, “gradually,” to quote Mark Twain, “taking it in, all the while opening and closing her eyes in a kind of religious ecstasy, as if she had never tasted anything quite as good as an overcoat before in her life.” It is no use arguing about tastes, not even with a cow.