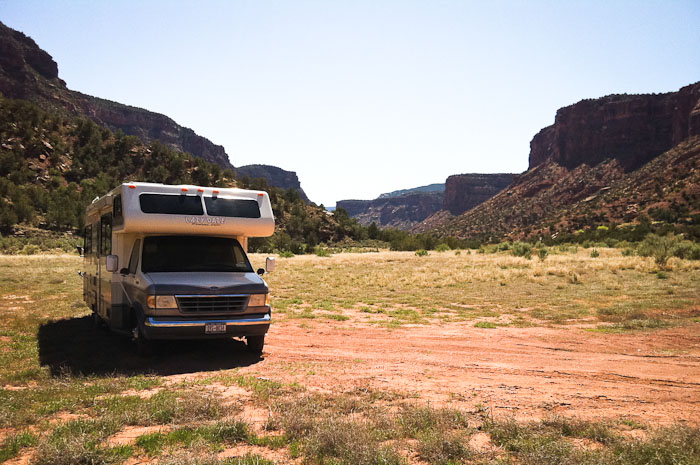 From the roadside POI sign along Rt-141 10 miles south of Gateway CO:

Sewemup Mesa is one of the ecologically pristine areas in western Colorado, having been isolated from development by its almost impassible belt of encircling sandstone cliffs. A striking band of thousand-foot-high cliffs of Wingate Sandstone encircles more than 75% of Sewemup Mesa. Many huge ponderosa pines line the canyons of the mesa top and grow directly from sandstone terraces along the mesa's western cliffs. The cliffs provide nesting sites for the endangered peregrine falcon, as well as for the golden eagles. Bald eagles winter along the Dolores River at the area's edge. Mountain lions rule the mesa, and the lower slopes are important big-game winter range for deer and elk.

The legend of Sewemup Mesa began in the late 1800's as a real true cattle-rustling operation. A local rancher "rustler" would drive stolen cattle, from both Utah and Colorado up into the well concealed "pockets" of the mesa. There he would rope them, tie them down and with a sharp knife, cut out the piece of the hide containing the brand. He would then sew them back up with bailing [sic] wire and rawhide. After the wounds healed, the cows would be branded with the rustler's own brand. Then they would be put back on the range with the other cattle and no one was any wiser.

Sewemup Mesa Canyon is a limited, rough, but picturesque boondocking site along the BLM primitive road into the canyon below Sewemup Mesa, a half mile off CO Rt 141 about 10 miles south of Gateway CO.

Not very long ago, Dr. Pepperberg began trying to teach Alex and another gray parrot, Griffin, to sound out phonemes, which are the sounds that letters and letter combinations represent. English has forty phonemes altogether. She and her colleagues wanted to see if the birds understood that words are made out of letters that could be recombined to make other words, so they started training the birds with magnetic refrigerator letters.