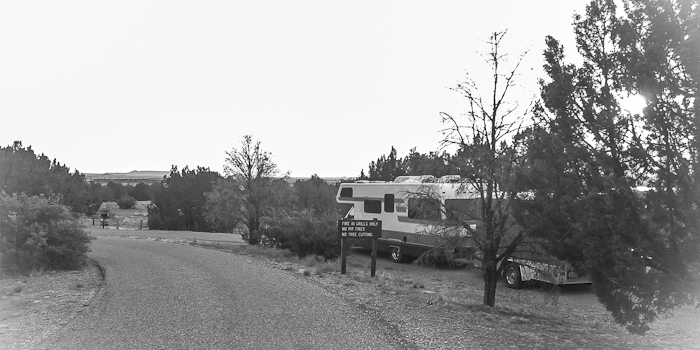 Santa Rosa Lake State Park is located on the shores of a Pecos River Reservoir about 7 miles north of Santa Rosa NM. This park offers quiet camping among the junipers and boating and fishing in the reservoir.

Teosinte and the Improbability of Maize

The ancestors of wheat, rice, millet, and barley look like their domesticated descendants; because they are both edible and highly productive, one can easily imagine how the idea of planting them for food came up. Maize can't reproduce itself, because its kernals are securely wrapped in the husk, so Indians must have developed it from some other species. But there are no wild species that resemble maize. Its closest genetic relative is a mountain grass called teosinte that looks strikingly different - for one thing, it "ears" are smaller than baby corn served in Chinese restaurants. No one eats teosinte, because it produces too little grain to be worth harvesting. In creating modern maize from this unpromising plant, Indians performed a feat so improbable that archaeologists and biologists have argued for decades over how it was achieved. Coupled with squash, beans, and avocados, maize provided Mesoamerica with a balanced diet, one arguably more nutritious than its Middle Eastern or Asian equivalent.