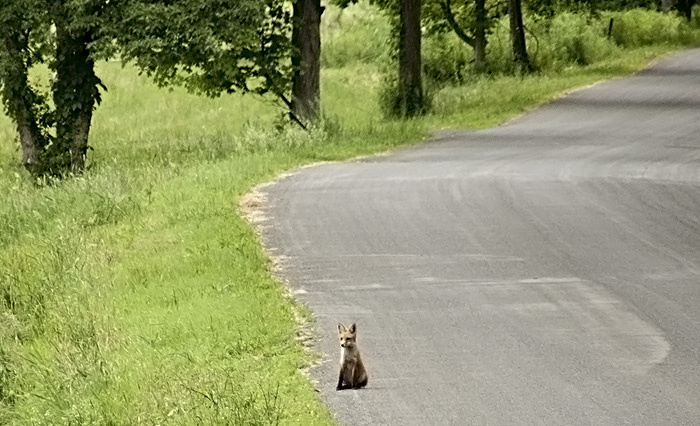 If you want street smart kits raise them on the street. A family of red foxes has been doing just that for several years now, a couple hundred feet down Clark Road from the house. This young guy has gotten to the point where he will alertly stand his ground as a car passes. Their den is at the base of an old tree a few feet off the road to the right. This kit and his sibling across the road are sitting above an old dry culvert where he can take refuge in an emergency.

Hickory was another favorite. Rambling through the Southeast in the 1770s, the naturalist William Bartram observed Creek families storing a hundred bushels of hickory nuts at a time. "They pound them to pieces, and then cast them into boiling water, which, after passing through fine strainers, preserves the most oily part of the liquid" to make a thick milk, "as sweet as fresh cream, an ingredient in most of their cookery, especially hominy and corncakes." Years ago a friend and I were served hickory milk in rural Georgia by an eccentric backwoods artist named St. EOM who claimed Creek descent. Despite the unsanitary presentation, the milk was ambrosial - fragrantly nutty, delightfully heavy on the tongue, unlike anything I had encountered before.