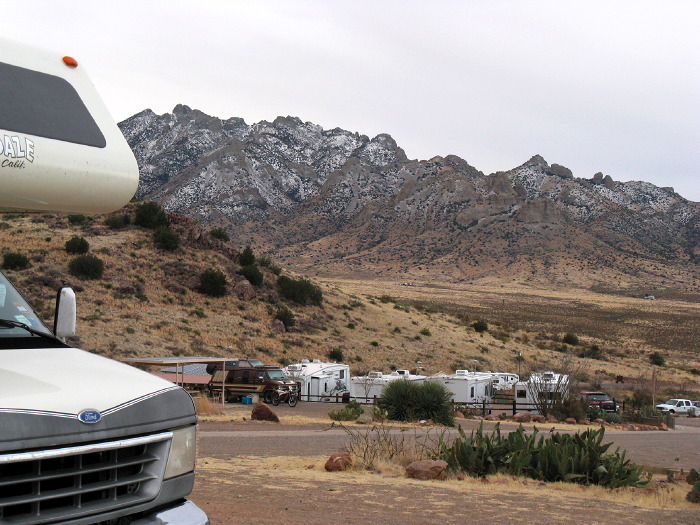 Those are the Florida Mountains, home of the 15 Persian Ibex given to us about 1970 by the Shah of Iran. They are right at home there in an environment that closely resembles their home in Iran and have done well, so well there is now a hunting season for them.

Strangers in a strange land. Foreigners from the other side of the world. Both statements aptly describe the Persian ibex, a wild goat brought to New Mexico from Iran three decades ago.

In 1970, the Department of Game and Fish released 15 Persian ibex in the Florida Range near Deming as a welcomed wildlife guest and big game species. Today, the guest is firmly ensconced in its new home. But is it still welcomed? Ask 10 different people, and you'll get 10 different answers. Some affirm the Persian ibex as an attractive species, innocently and successfully occupying an unfilled niche. Others protest that it's an ugly, noxious interloper, competing against native species, no longer welcome here. Under certain circumstances, both statements may be true. Meanwhile, this tenacious, adaptable creature is here to stay -- for now -- in the Florida Range.

Human access to the rugged Floridas is difficult. The mountains rise abruptly 2,800 vertical feet -- forbidding islands above a sea of sand and mesquite. Primarily Precambrian rock, the Floridas are ten miles long by five miles wide. From a distance, the peaks seem barren; up close, they're anything but. As you approach, you'll begin to see splashes of green against the brown: Upper Sonoran vegetation including sotol (desert spoon), yucca, prickly pear and barrel cactus, ocotillo, creosote bush, juniper, scrub oak, and hackberry.

Visitors can best glimpse the beauty of this area from 80-acre Spring Canyon Picnic Area, a part of Rock Hound State Park, 12 miles southeast of Deming. Scattered about on the slopes are semiprecious gem stones, for which Rock Hound State Park was named and established. To access a mountain hiking trail, head for the last picnic table on your right as you face the entrance.

As a wildlife watcher, will you be able to spot one of the 350 Persian ibex living in this area? Hard to say. A Persian ibex can jump several times it own height, walk across sheer cliffs, and spot movement from a half mile away. Still, ibex are occasionally glimpsed by visitors. Stealth, camouflage, and patience are the watch-words for spotting a Persian ibex.