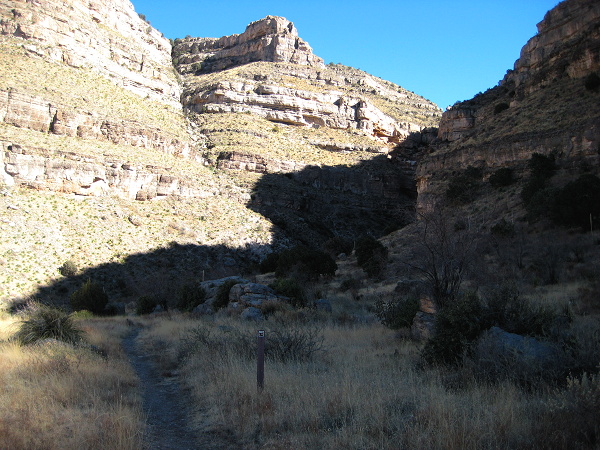 The Dog Canyon line cabin is just ahead

The remains of the stone line cabin in Dog Canyon is less than 1/4 mile ahead of where I took this picture but is well hidden down in the canyon. In tomorrow's journal I'll post a picture of what is left of the cabin down near the stream. I'm not sure of this and I might have it wrong but I think the cleft you see in the rocks a bit left of center in this picture is the route of the trail as it heads up and out of the canyon above the line cabin. The brochure I so conveniently misplaced describes the section of trail above the cabin as rather difficult and if that's the route I would tend to agree with that assessment.

Today I broke camp to head off toward Deming New Mexico

My three weeks at Oliver Lee Memorial State Park are up and I need to move on. The rules at New Mexico State Parks limit the length of time one can stay to three weeks on and one week off. My plan is to meet up with my new friends Andy and Kate & Terry at Rockhound State Park when they move over there in a couple of weeks. Today I went into Alamogordo to run some errands and do laundry and tomorrow I'll wander the 125 miles or so over to Rockhound.

Finding the Words to Fit It

There is an idea current in the prevailing culture that writing about something that pains you heals the pain. I was not, when I began writing my life story, and am not now, healed of my mother. But you do gain a small distance from anything by keeping it in suspension in your mind while you work at finding the words to fit it. The process is so slow and incremental that you don't notice its effect, but the point is that it is a process.

Source: Almost There: the Onward Journey of a Dublin Woman, a Memoir by Nuala O'Faolain