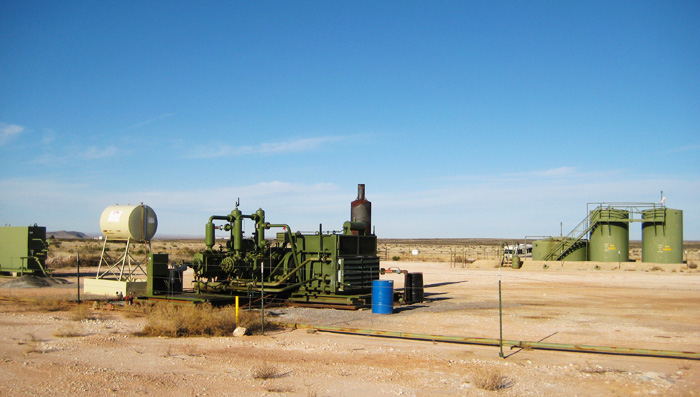 All day, all night, thump, thump, thump. Sounds like an old 2 cylinder John Deere tractor idling off in the distance. What could it be? Nobody runs those things full time. Certainly not out here in the desert. I'll find out - when I leave the park I'll head toward the thump and see if I can find the source. And find it I did, a couple of miles east of the park - a large two cylinder pumping engine; pumping what I'm going to guess is natural gas and I'm also going to guess it's running on the gas it's pumping. But then what's in those storage tanks? Crude?

Farther west, eventually, but to get there I have to get around the mountins just west of Carlsbad. That means either a run around the south end through El Paso, TX or heading north to Artesia or Roswell, NM and from there head over the mountains to Alamogordo, NM. I'm choosing the later, mainly to stay avoid driving the interstates around El Paso. First stop: Bottomless Lakes State Park, Roswell, New Mexico, at least for the night.

What a deale of cold busines doth a man mis-spend the better part of life in! in scattering complements, tendring visits, gathering and venting newes, following Feasts and Playes, making a little winter-love in a darke corner.