This section has gotten a bit long so I've given it its own page PT-1845 Cooling System Issues.

As part of the PT-1845 Fire Damage Repairs to my 1845 I replaced the hydraulic reservoir filler cap with a Parker cap with a built-in 10 micron filter (MSC part number 03211216). I machined the old filler neck off the reservoir cover and drilled and tapped mounting holes for the new cap. Be sure to put some kind of keeper through the holes provided to keep the cap from accidentally coming off. I had this happen in the woods one day when a branch unlatched the cap and it came off. 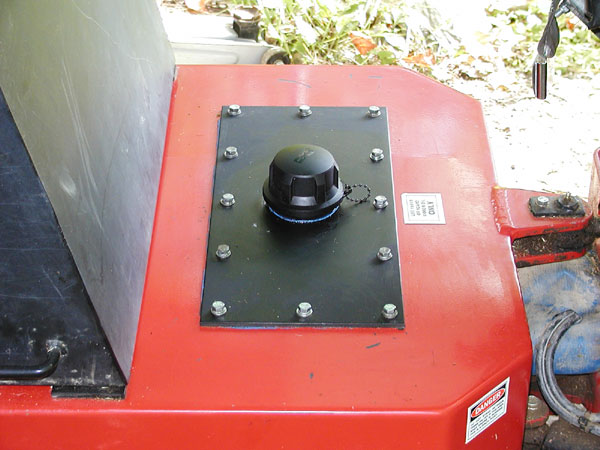 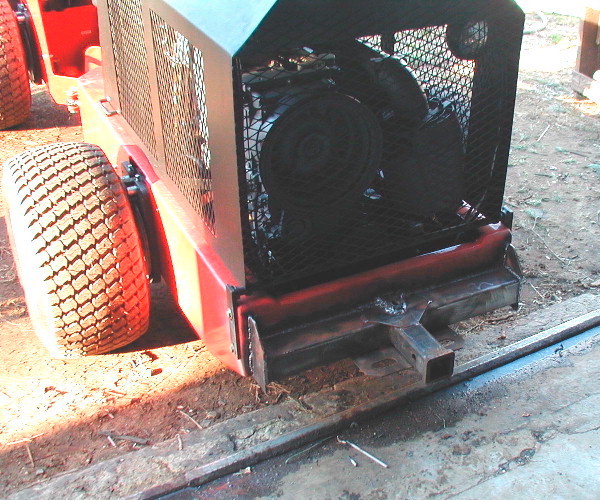 A couple of folks have added an alternate auxilliary circuit to the joystick curl mode.

See Charlie Iliff's posts in this Joystick Circuit Selector Button thread on TBN for his description of the setup he added to his PT-1845 (see a picture of valve installation and a picture of the button). Charlie used a solenoid operated double acting diverter valve he bought from W R Long (supplier of his 4 in 1 bucket).

See Dave Sisk's posts in this Electric selector valve thread on TBN for some good pictures of his installation on his old PT-1418. Dave used "a Gresen solenoid-operated selector valve (although I notice it has "Parker" stamped into it...go figure), rated for up to 8 gpm at up to 3000 PSI. The best price was at http://www.surpluscenter.com , $139.50, part# 9-1782." Here's Dave's plumbing diagram.

I also bought a 17 inch panoramic mirror to mount across the top of the ROPS J C Whitney part #81UC1280R @ $9.95 ea but haven't gotten around to mounting it.

I replaced the seat on my PT1845 with a Northern Tool item#1756 Mid High Trim Line Seat @ $99.99. I'm finding this seat is working out fairly well - it is about twice as thick as the OEM seat and I don't bottom out in rough going but it can still get rather bouncy. Running the tires at 12psi helps. A kidney belt helps too (in general I've found a kidney belt necessary for extended seat time on the PT1845 - there is something about the motion or posture that generates more back pain than I've experienced with other tractors). Sitting up very straight and not leaning back against the backrest helps too.

I bought one pair of Gempler's #68524 "Diamond Pattern" studded ATV chains and mounted them on the front wheels to help limit wheel side slip and "crabbing" while plowing snow - they work well. 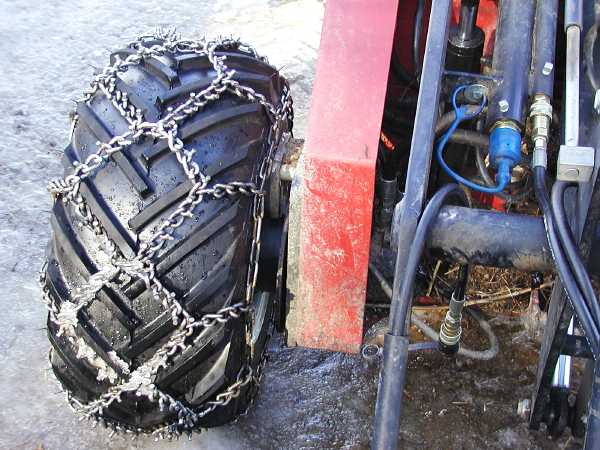 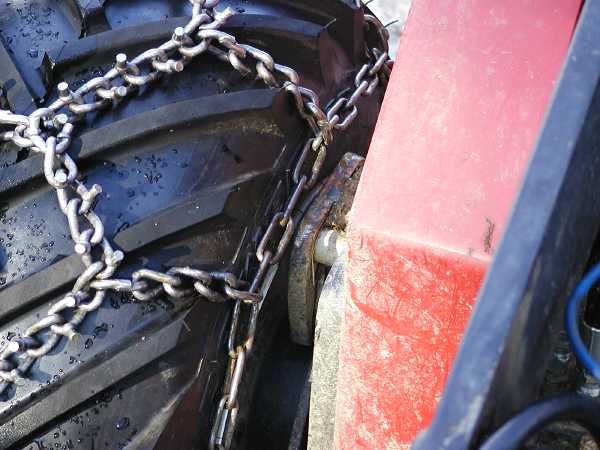 On the "Glow Plugs" thread on the TractorByNet.com Power Trac forum Yardscaper writes:

Just updating this thread. I have just gotten off of the phone with my local Deutz distributor and will be picking up the intake manifold heater for my 2445 on Monday of next week. He quoted me $85.00 for the heating element itself (which he refers to as a glow plug), a push button switch for the dash, and a washer for the glow plug port. He told me it is easy to install, just run a fused line from a power source to the switch and down to the element. All that has to be done is that prior to cranking the engine, hold down the button for up to 30 seconds if it is 0 degrees, above zero the time to hold the button decreases, and crank the engine. After a few times, he says you will get the timing down. FYI: On all 1011f model engines, there is a provision already built in for this, two ports on all 4 cylinder engines and 1 port in all 2 and 3 cylinder engines. He says most with four cylinder only use one element anyway.

I have been able, with lots of cranking, to start my 1845 down as low as 0 deg F but it does seem a bit of a strain on the starter. I may look into this. JHC