This problem has been discussed at some length on the TractorByNet.com Power-Trac forum and a search there will turn up other owners thoughts on the problem.

I've found over these past 800 hours (as of 2006) that the Deutz engine oem oil cooler is quite adequate to cool the engine IF, and I emphasize IF, it is clean. I think this point has gotten lost in some of the discussions on the TractorByNet.com Power-Trac forum about the cooling issue (along with some confusion in keeping the hydraulic and engine oil cooling systems separate in the discussions). When mine is clean it doesn't overheat. Keeping it clean is the challenge.

Cleaning the cooler takes real diligence with the way the internal fins are designed to trap chaff so effectively. 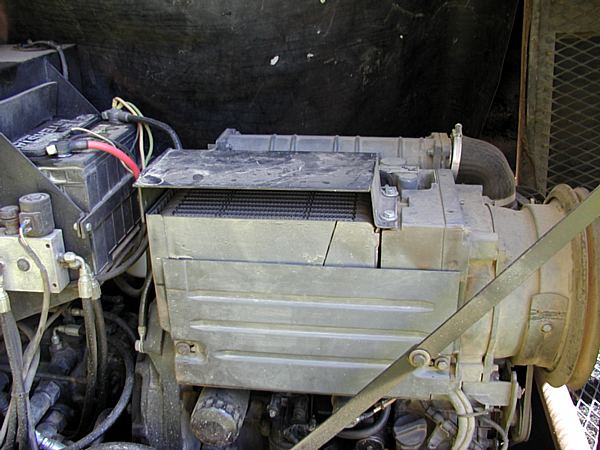 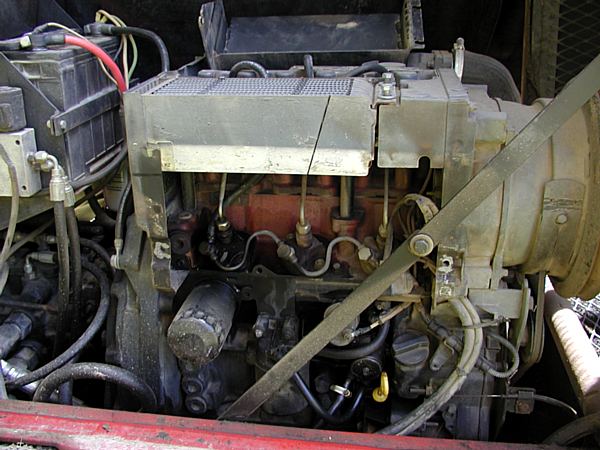 I've adopted Charlie Iliff's trick of holding a white card under the cooler while viewing down from the top using a flashlight. See those fins with all the little chaff-snagging sharp edges? 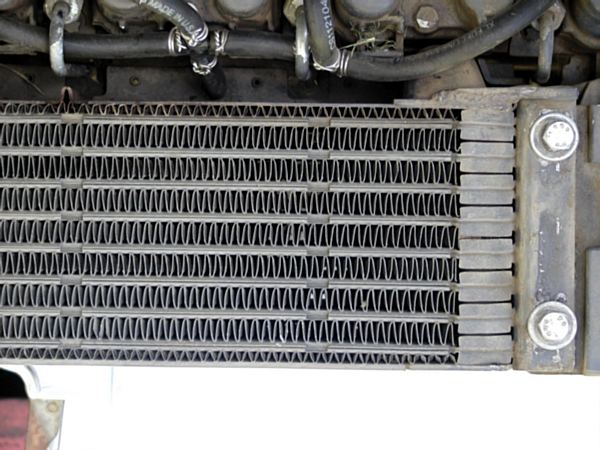 Many owners blow the chaff out with compressed air. Since I don't have air available where I clean the tractor I use water. I use one of those little tapered nozzles on a garden hose - the kind that looks like a mini fire nozzle that shoots out a narrow concentrated jet of water. I aim this water jet alternately up and down through the fins until the exiting water runs clear. This can take several repeats to dislodge all the chaff from the sharp little snaggers on the fins. Once or twice a year I'll spray some Simple Green over the fins before I start for an extra thorough cleaning.

Before I begin this cleaning process I drape an old towel over the electrics mounted under the cooler to keep them dry.

For some reason Power-Trac decided not to provide any filter for the cooling intake air flow and I've given up trying to design my own. I just cover the sides of the engine house with window screening, put a gasket made of plumbing pipe insulation around the perimeter of the engine house where it meets the tub and cover the back of the house (where the cooling air enters) with 3 inches (4 layers) of expanded plastic mesh sold as a roof ridge vent for use with asphalt shingles. I've found that if I just cover the back with window screening the intake air velocity is sufficient to suck leaves and grass up against the screen quickly blocking the air flow. The 3 inches of plastic mesh I use diffuses the flow enough to eliminate the major blockage. 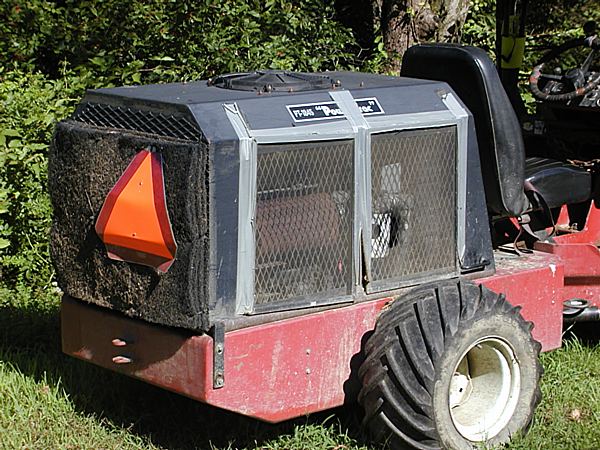 The picture above shows the filter mesh about as dirty as it gets. It may look pretty dirty but even at this point enough air flows through it to keep the engine from overheating. In fact I think the stuff it collects may increase its filtering efficiency and I leave it dirty except for the bigger leafy bits. Yeah, I know, the SMV sign is bent. Purposely. To allow some airflow between it and the filter mesh. 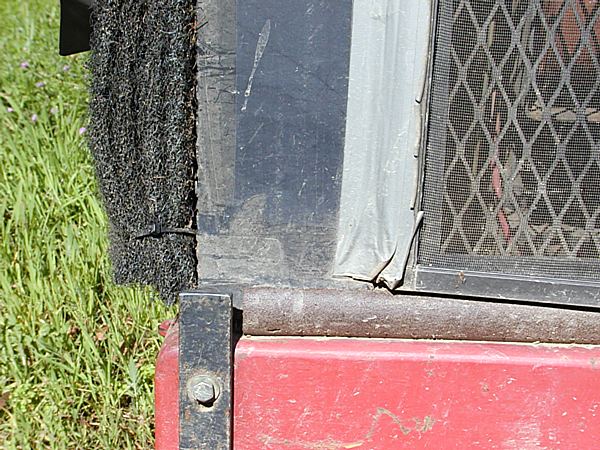 That combination works fairly well IF I mow often enough that I'm cutting immature green stuff that hasn't gone all chaffy. Then there's the added benefit of getting a better cut and faster to boot. The roughcut mower is no brush hog. Like any multiblade mower it doesn't clear the deck of the cut grass efficiently enough to quickly cut thick mature field grass.

In June 2008 the original hydraulic oil cooler fan died. My search for a replacement ended at Advance Auto Parts where I picked up an Imperial #226116 reversible 16 inch fan to replace the original cheapo 14 inch fan. This Imperial is rated 1400 cfm and draws 16.5 amps making it considerably more powerful than the original fan. I thought the added airflow it puts out might help keep the hydraulic oil a bit cooler while mowing and maybe cut down on the reduced climbing torque caused by thinning of the hot hydraulic oil. This has proven to be the case but a nice unexpected bonus is about a 10 degree reduction in engine oil temperature. In hindsight I should have made this upgrade years ago.