My aversion to oatmeal has stuck to me as tenaciously as mother's oatmeal stuck to my ribs back in the day. I'll bet you remember the stuff - a glutenous glob sitting in a puddle of milk with some brown sugar tossed on it. Ughh!! It's taken over 50 years of eating some pretty bad oatmeal to get up the gumption to overthrow mothers presence in the kitchen and make oatmeal my way. 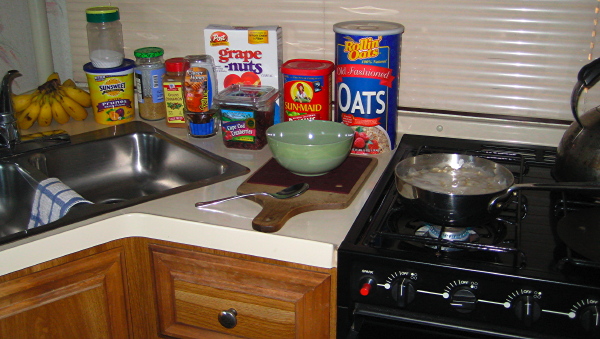 At the time I developed this recipe I thought oatmeal was a good thing and that it deserved a place on the table now and then. Now that I've moved on to a low carb diet I'm not so sure. But I'll leave it here for those who might enjoy it.

Put the pot on the stove and bring it to a boil, shut the heat off and cover the pot for a few minutes to let it steep. Decant the resulting thick oatmeal soup into your favorite cereal bowl. 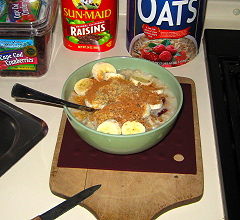 There you have it - John's pretty good oatmeal

I haven't gone very far here today but you get the idea - lighten it up and punch it up.

Excuse me, my oatmeal is getting cold.