This is a very basic molasses bread I tossed together. 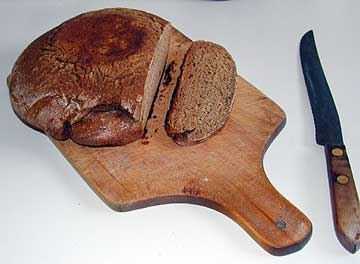 Toss everything in a mixing bowl and mix well. Then knead the dough on flour for a few minutes and form into a ball.

To quote Fanny Farmer, 1st edition: "The acid found in molasses, sour milk, and lemon juice, will liberate gas in soda, but the action is much quicker than when cream of tartar is used." As soon as moisture is added, the gas will begin to escape so bake as soon as possible.

Here I depart from convention. I squash the ball down a bit and put it in a good sized pot, well oiled with olive oil. Then I set the pot on the stove - rather than in the oven - and cover with a loose fitting cover (maybe propped up with a fork or something - maybe a square of foil) to let steam escape. Then I let it cook over low to medium heat until it smells sooo good.

Add some dried fruit, nuts, seeds, whatever is in the cupboard at the moment. Ah, do I remember years ago reading that the Tassajara community would take the daily leftovers, veggies, salads, whatever, and incorporate them in the next days bread? I think this may be the beginning of a quirk I have developed of trying some rather offbeat food combo's. It's time I reread the Tassajara books.