Chopped hummus? Why would anyone hand chop their hummus? They probably wouldn't but I'm one of those rare birds who doesn't have a blender or food processor and I wanted some hummus. So I chopped it.

And ended up with some nice crunchy hummus. An unexpected crunchiness I like a lot. So I call it John's Crunchy Chopped Hummus. A food processor would make it go quicker and if one is careful not to process it too fine it should be possible to electrify the processing. Try it and see if it works.

Is this heart healthy hummus?

I thought so at the time I made this delicious hummus but now I'm not so sure. In his book, Prevent and Reverse Heart Disease Dr Esselstyn's prescription for a heart healthy diet contains no animal products, no oils and no nuts. Back then I found Dr. Esselstyn's research into heart attack proofing one's body through diet quite compelling.

I've since changed my mind and no longer eat the chick peas and other carby stuff in this recipe. But for those who like their hummus chopped, here's what I made.

Add and chop in:

Add and mix in:

On ingredients and quantities

I have no measurements to offer. I wanted some hummus. So I took a look around the kitchen to see what might work.Then put in as much as seemed reasonable of each ingredient. Your hummus is your hummus - you decide how much you want to make and how much of what you want in it. Make it your way. Next time I make this hummus it will surely come out differently and that's part of the fun. Figuring out what to put in. What to leave out. The only restriction is to leave out the baddies - the animal parts, the oils, the nuts, the salt. Those are my baddies of the moment. If you're not into baddies - put them in. Someday the salt might come off my list of baddies but at the moment I'm trying to find out if I can wean myself off added salt by trying to find ways to enhance flavor without it. The dried cranberries help a lot in this case.

Toss the first group of ingredients in a chopping bowl. I put in a few tablespoons of chick pea broth, saved from cooking the chickpeas, to add some liquid to the mix. Water would work fine. Or fruit juice. I like the idea of rescuing the nutrients that end up in the cooking broth from death by drain.

Start chopping. Stop when the hummus is fine enough to suit you. Hand chopping will make a nice crunchy, chunky hummus. The chopping will seem to go very slowly at first and then will begin to speed up as fines develop and start holding the peas and things under the blade. When the mixture is chopped fine enough add the orange and banana and chop them in. The banana gives the hummus some nice cohesiveness. Finally fold in the cranberries. 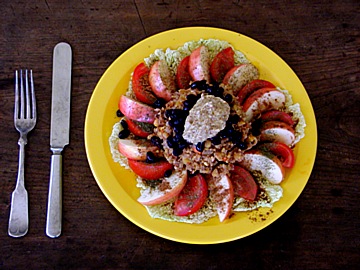 Humus with Beans, Tomato and Apple

Variations are limited only by your imagination. Play with it. Toss in some leftover fruits and veggies. Dried fruits. Maybe some black beans. Tomatoes. Cooked squash might be good.

Eat it any way you like hummus. The traditional thing seems to be to fill pita pockets with it and add some greens and fruits and veggies. Raw or cooked would seem fine to me. How about hummus andgreens and leftovers in a wrap? Or put it on a salad maybe? Or eat it with a spoon right out of the container? Whatever.

My first taste was plopped on a bed of napa cabbage, topped with black beans and a dollop of Dijon mustard and ringed with tomato and apple wedges seasoned with cinnamon and dill and dressed with balsamic vinegar and honey.