I bought Power Trac's rubber lip kit which consists of a heavy strip of rubber conveyor belting and a steel strip and the bolts to mount them. Here's a picture of the kit installed. 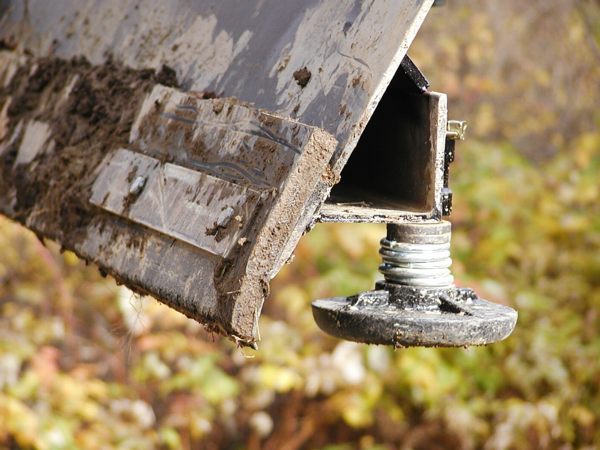 The steel strip mounts even with the bottom of the blade with the rubber sandwiched between and centered so you can reverse it when worn out. I clamped the steel and rubber in place then drilled through the sandwich for the mounting bolts. To give an indication of how long the rubber will last I would guess that, as of Jan '07, I've used it over the course of several winters to plow roughly 1/2 mile of gravel driveways a total of 15 - 20 times and the rubber is now worn about half way to the plow blade. I'll want to change it before it gets worn all the way down to the steel plow blade so I'd guess I've used maybe 40 percent of its useful life. I'm impressed with how durable the rubber has been.

Here's a picture of my newly modified blade. My first winter with the blade, I managed to bend the ends a bit by accidentally ramming ice chunks frozen to the ground. We'd had snow, then freezing rain, and I had plowed in a rather ragged fashion leaving balls of slush along the edge of the road. These froze solid and when I stuck them plowing after the next storm I bent the blade ends back a bit.

I found that regulating the height of the blade using the caster wheels is not very effective. The casters are mounted too far back from the blade and are too spongy as well. Plowing my gravel driveway the sponginess lets the blade alternately dig in then spring back making control much harder than it needs to be. 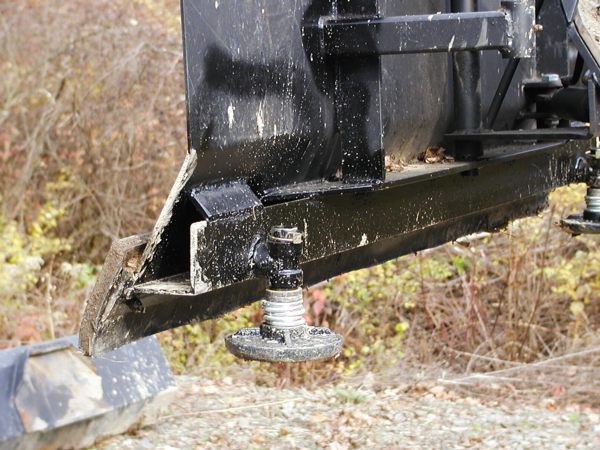 I bought a pair of replacement shoes for a Fisher snow plow from NorthenTool.com (part #103904 @ $28.99 ea) and a pair of 1 inch forged steel socket weld tees from MSC (part #36986404 @ $8.61 ea). I bored the tees to slip fit the spindle of the shoes, then shortened them a bit to give me more adjustment range. And put in some grease fittings. Then I went off to a welding shop and had the blade straightened and a piece of 3-1/2 x 3-1/2 angle welded full length to reinforce it and the tees welded to that.