This is a brief journal of the second week of my 2007 road trip to the southwest. I'm dividing this journal into separate pages for each week to keep them more manageable.

Heading north from Ft Stockton most of the taller scrub is left behind and the landscape is looking less scruffy. Up the road a piece is Pecos TX, a neat old town going about it's business (oil mostly these days I think) completely untouched by modern commerce. That's all clustered around the I-20 interchange south of town.

I should have taken a couple of pictures. But didn't. Darn. Next time. 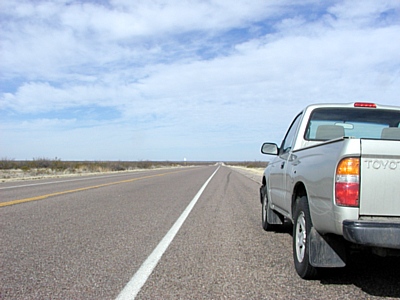 Finally I'm beginning to see some real desert. It's not like NM desert but it's getting closer. 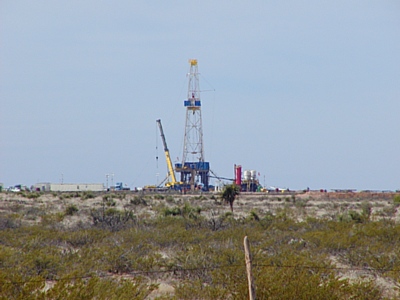 I should have given the camera a little more exercise. There were a few interesting things along this stretch. Just north of Rig 97 are a few folks living out in the desert in RVs next to small outbuildings. What a view these folks have - 360 degrees and hardly a soul in sight. Then there's the little red building - same area - set well back from the road on a dirt track - with a big OPEN sign by the door. Whaa? Open? I should have stopped. Next time. Always next time. I gotta slow down a bit. I'm missing a lot of the fun. Then there's the new red Suburban parked on the verge with ALL the windows shot out. Must be the bosses car :-) 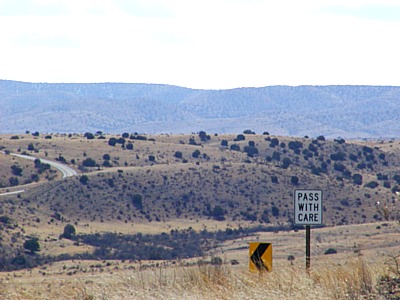 US 82 west towards Cloudcroft NM

Why should I be able to actually SEE the political boundary between Texas and New Mexico drawn in vegetation? There's a marked difference either side of the border. The Texas side has a scruffier, worn out look with more deciduous brush and bushes (careful now John). The New Mexico side has more grasses and lower growing plants. Would this be the ecological result on the native and invasive species of two states different grazing policies played out over time? Must be. I must say the New Mexico side is more attractive to the eye but I have no idea whether it is healthier than the Texas side. 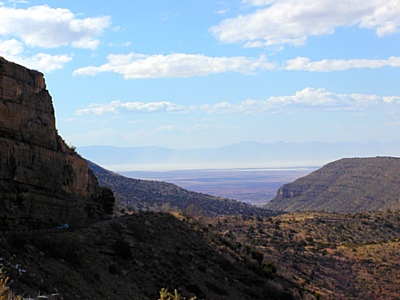 Alamogordo NM with White Sands beyond

Coming down the mountain from Cloudcroft NM (elevation about 8,500 ft) was a bit more abrupt than the long gentle rise of the approach from the east seen above. That's the famous White Sands blowing in the wind and obscuring the San Andres mountain range in the distance. Alamogordo NM is kind of tucked up against the base of the Sacramento Mountains I'm descending here. 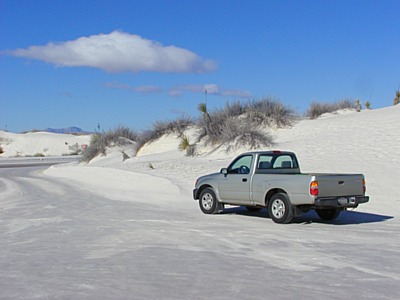 It snowed last night in Alamogordo. Ha! sorry, couldn't help myself. That's gypsum folks - think drywall. It rained at White Sands National Monument within the last few days and the sand is a bit damp and some areas are closed due to flooding. Driving on this stuff is like driving on damp drywall compound. It's a bit slick, washboarded and potholed on the unpaved roads.

After a quick early morning visit to the White Sands National Monument I thought I might backtrack to Alamogordo and take US 54 north to US 60 and take 60 west for the day. Somehow when the moment came to turn left out of the parking lot I impulsively turned right instead. The heck with that backtracking stuff. I just carried on westward along US 70 west and picked up I-10 west at Las Cruces NM. When I got tired of that I-10 heavy truck traffic nonsense I headed north on US 191 to catch US 70 west in Safford AZ about motel time.

No rooms available in Safford, sorry, a new Phelps Dodge copper mine is under construction and the city is inundated with construction and mining workers (Safford: rebirth of an Arizona town). Darn, I wanted a short day. Oh, well, Globe AZ isn't too far west. I'll just head on over that way. Nice ride and I got to see my first saguaro cactus forest (along US 70 in the San Carlos Indian Reservation just east of Peridot) aglow in the low light of a setting sun. Perfect timing. Several hillsides north of the highway are well populated with their majestic forms.

Wikipedia tells me it can be 75 years before a saguaro sends out its first side arm.

This was the first morning I've needed my ice scraper. There was a heavy frost in Globe last night.

There is no doubt this is a mining town (silver at first, copper in nearby Miami now); the motel site is carved out of a hillside retained with a wall of those huge mining truck tires. They have been there a while and are now so well integrated into the soil and vegetation they look almost natural. Almost.

Phoenix AZ has grown into quite a metropolis and the traffic is a bit much for this country boy. It moves along at a pace that makes route following a challenge for the stranger to town. At one point I missed an exit for US 60 and had to find my way back to it on city streets.

One of my goals this trip is to satisfy my curiosity about the gathering of RVs at Quartzsite AZ. Thousands of RVers make the annual trek to boondock at the Quartzsite BLM Areas and take in the RV show, Gem show and the ever present flea market. The big crowds are gone for the season and the flea markets look a little shopworn but the desert still carries a white crust of a few thousand RV's scattered about.

This day's goal was to get a look at Slab City, the famous RVers long term boondocking city in the desert just east of Niland CA. 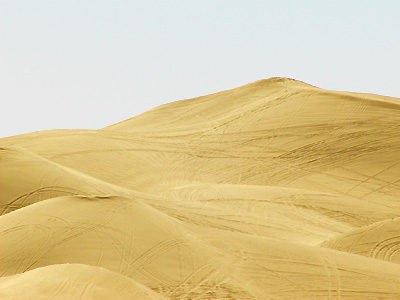 CA 78 cuts across the Algodones Dunes about midway along their 100 mile length. Now I see what dune buggies were invented for. What a hoot! Imagine a sandbox 3 to 20 miles wide and 50 miles long to play in (north of CA 78 is off limits). I met an older couple on a Goldwing at the overlook where I snapped this picture. They raised their kids playing here over the course of 20 years, first with three wheelers and later four wheelers. They said holiday weekends can bring out as many as 250,000 people. On everything from classic dune buggies to hot rodded racing buggies to four wheelers and motorcycles. Today I saw mostly fourwheelers, motorcycles and a few hot rod buggies in the short time I was there.

At Home in Slab City

Slab City didn't seem very crowded today but I don't know what one might expect. With people coming and going, some stay year 'round, 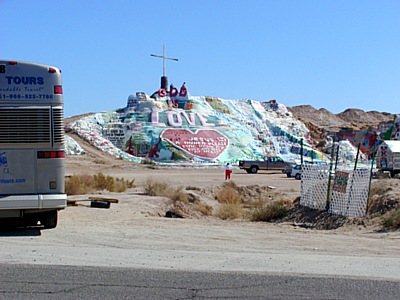 Salvation Mountain at the entrance to Slab City

Gawd, when did the tourists discover the slabs? See Wikipedia's page for the story of Slab City. 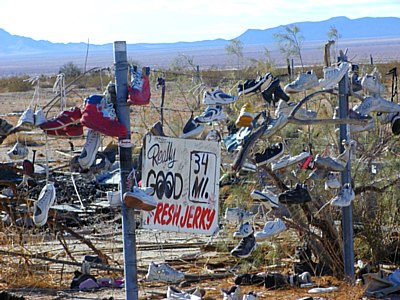 Make that 34 miles east to the Vidal Jct of CA 62 and US 95. This is or was quite the party zone. CA 62 parallels the railroad for 10 miles or so through here and this spot marks a railroad junction with the burned out remains of the restaurant behind the fence and a burned out gas station. The track along the road is raised above the desert 2 or 3 feet and is decorated along most of this 10 mile stretch with initials, hearts and various sentiments constructed of black and white stones found along the right of way. It would make an interesting project to make a panoramic video of it from a slow moving vehicle. I wonder if that has been done yet.

It's time for a travel break and a visit with my cousins Ken & Connie for a few days. Posts are likely to be spotty for a while as we kick back and catch up.