This is part 2 of the story of my development of a custom leather case for my iPod Touch. 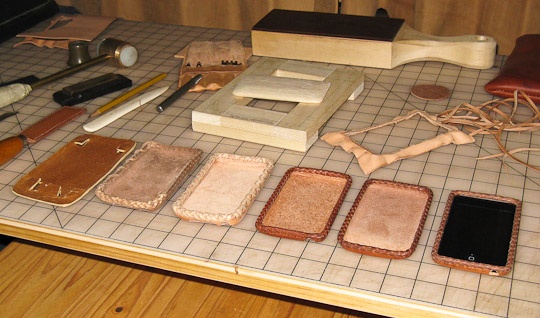 Steps in the development of a leather case for my iPod touch, February 15, 2009

To recap part 1 let's start back at Version 3

Aha! number one - forget the cradle cable access hole - the laced edge grips the touch just firmly enough that it can easily snap in and out of the case. So take it out for syncing and charging. That gets rid of that big weak slot across the bottom edge.

To test the ideas I had come to in Version 3 I refined them in Version 4. It was a great success and I would have stopped here if my workmanship on the lacing and the placement and size of the audio jack hole had been better.

After using number 4 for a few weeks I moved on to number 5 to try and refine the lacing and the audio jack hole placement. Number 5 was a complete bust - I made the mould too shallow and the iPod wouldn't snap into place. Plus I screwed up the lacing a bit. 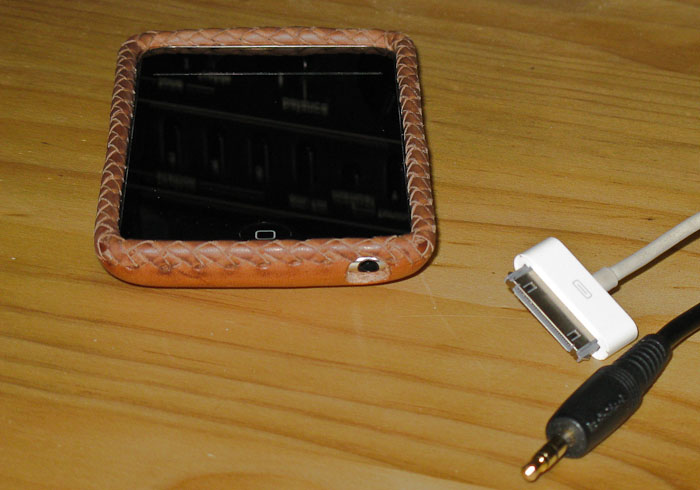 Version 6 fixed both of the problems with Version 5 and looks like a keeper. 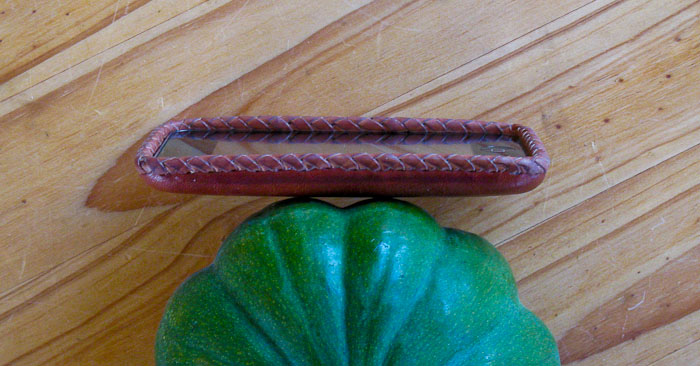 Version 6 has been working out great and I love it - but it is shrinking! It is now 6 weeks later and it looks like I spoke too soon about version 6 fixing the fit problem with version 4. The case still works well but it has shrunk lengthwise a bit exposing the chrome at the edge of the touch screen and inducing a curvature to the profile. That offends my eye.

I'm going to have to think through the implications of this shrinkage and see how I might refine my molding technique to prevent it. I suspect I need to be more patient and let the leather dry in the mold for a couple of weeks before I trim the blank to finished size in preparation for lacing the edge. The leather may just need plenty of time to relax after the stress of the molding process.

This case was built during my 2008 winter stay in New Mexico. On my trip back east in the spring, shortly after the above was written, the case expanded as the relative humidity increased and kept its shape until I came west again in the fall. On the way west into drier air it promptly shrank again. I guess that's just in the nature of leather and I've come to accept the dry weather shrinkage and I absolutely love the case. And the iPod touch. Together they have changed my life.