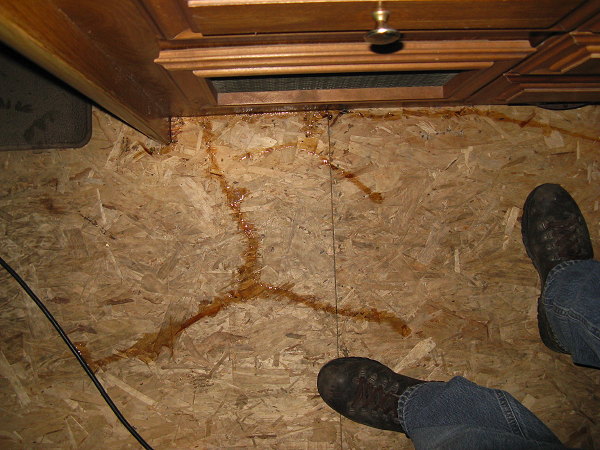 Am I ever glad I ripped out the old carpeting

I'm getting tired of living with the rough old OSB subfloor but not having a carpet has some real benefits. My next floor covering definitely won't be carpeting. As long as this old RV is going to keep humbling me I need to see the waters flowing.

More than once since I ripped that carpeting out I've discovered water on the floor. Water that would have flowed undetected under the carpeting, at least until growing stuff started to stink. Most recently was a month or so back when during a hard rain I found water flowing along the wall under my desk. A day spent on the roof resealing around the vents and along the edge trim fixed that. Or so I thought. But that's another story.

Today it rained off and increasingly on as I headed down through Pennsylvania on I-81. Mid afternoon I stopped at Lowes in Hazleton PA to do a bit of shopping and came back to the river you see above coming out from under the closet by the door. Hoo boy - looks like I'm back in the barrel for another leak sealing lap.

Tomorrow I'm going to head on down I-81 to catch I-68, I-79 and I-64 west toward Kentucky while I contemplate this mess. This rig needs to dry out before I try sealing leaks and I need some time to think too. Besides, it's getting cold out here.

During the Second World War, Deming was again the designated location for a training base. This time, the Deming Army Air Base was established east of town to train young airmen in the use of the secret Norden bombsight. The trainees were processed in groups of 500 every 6 weeks, and they flew their missions in the 150 AT-11 Beechcraft trainers, designated the Kansan, each armed with up to 10 practice bombs.