This is part 1 of the story of my development of a custom leather case for my iPod Touch.

In October of 2008 I bought one of the then new 2nd generation Apple iPod touches. This touch turned out to be one of my all time favorite gadgets and being interested in learning more about leatherworking I wanted to honor it and protect it with a nice leather case of my own design.

The touch is thin and light and slick. It is easy to drop it or have it slip out of a pocket when bending over.

I bend over a lot.

I wanted a case that would make it easy to hold onto, easy in the hand for extended periods while using it as an ebook reader, and "sticky" in the pocket. I like leather - it's is a friendly, touchy-feely material and I thought it might work.

I wanted my leather case to have some texture to help keep it from dropping out of a shirt pocket while bending over. Something along the lines of the Belkin Silicone Sleeve Case for iPod touch 2G you see to the right - but in leather.

It was a bit tricky figuring out how to approach this problem. One needs to be able to get at the controls and except for one button, the touches controls are on the edges. There's an on/off pushbutton on the top left edge, a volume rocker switch near the top of the left edge, a cradle jack and an audio output jack on the bottom edge. Plus nearly the whole face is a touch pad.

It took a while to figure out how to attach some kind of leather pouch or wrapping in a way that it would stay on while giving full access to the screen and controls. 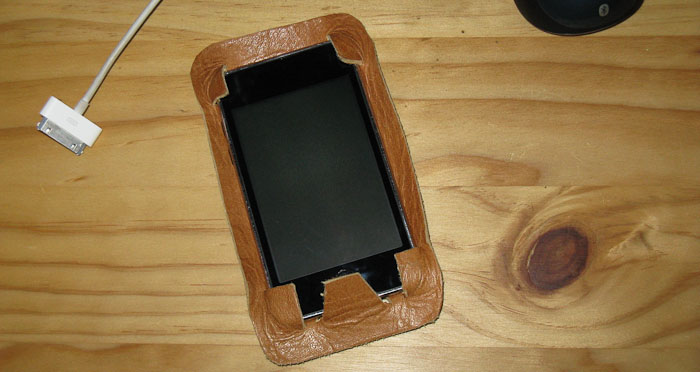 My first idea was to have a a piece of leather with little tabs grabbing each corner. This sort of worked but was not very pleasing to the eye. Plus some of the buttons were awkward to operate.

Next up was an attempt at a molded skin with slots along the edges for access to the buttons and connectors and a round laced edge to overlay the face a bit and hold the iPod in place. This looked promising. The laced edge looked like it would hold the touch in place ok but the holes weakened the edges too much. The leather I chose for this iteration was too thick and I didn't even bother to finish the crude lacing - But I had the germ of an idea and I moved right along to version 3.

Aha! number 1 - forget the cradle cable access hole - the laced edge grips the touch just firmly enough that it can easily snap in and out of the case. So take it out for syncing and charging. That gets rid of that big weak slot across the bottom edge.

This is getting a little long winded - let's continue the story over at iPod Touch Case - part 2.